Arahntu is a cavalier/fighter. She pledged herself to the Order of the Dragon and in doing so has sworn to do everything within her power to protect and serve her comrads. She worships Anhur and fights with a falchion. She also keeps a light crossbow and a dagger, and wears studded leather armor.

Arahntu is an Aasimar from the city of Skuld in the Mulhorand region. She has been serving as a member of the city’s standing militia since she came of age. Recently, Mulhorand’s ally, Sespech, sent out requests for emissaries to come and help rid one of its newly acquired lands of bandits and other lawless foes. Arahntu, who had risen high in the militia’s ranks and who had proven herself capable of such as task, was sent to the Shaar and joined a small band of heroes. Her city rulers hoped to have her there to help facilitate trade between Skuld and the future city of Irongate. 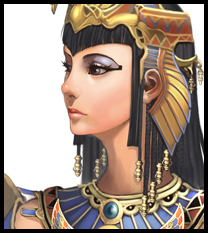