5'3", 148lbs, Grey hair and skin, normally dressed in white or black robes with a black face mask. Armed with a katana, wakizashi, kusiragam, and the longsword Shadowfrost.

Rikimaru was born in Shou Lung, a major kingdom of Kara Tur. He followed the Golden Way to Thesk after the Tuigan Horde was crushed by the combined forces of Thesk and the Zhentarium. After settling in the Shou quarters of Telflamm, which is one of the largest in all of Faerun, Rikimaru heard of the call for adventures to help settle the Shaar and made his way to join the Steel Vanguard. Once the Steel Vanguard was given a declaration awarding them the right to rule the Shaar he became the spymaster for the fledgling kingdom of Shaarhaven. After several adventures Rikimaru was cursed for the rest of his existence with becoming a Shade. His new abilities have been put to use in his spying and in ferreting out a secret temple of Shar that was masquerading as a temple of Mystra.

Shades are humanoids who have merged with the essence of the Plane of Shadow. They grow more powerful in areas of darkness or shadows, including the ability to leap from shadow to shadow, to create shadowy duplicates of themselves, and even become entirely invisible. They can also decrease the amount of light in an area, and can see through darkness, even of the magical variety. 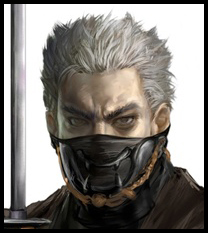